Media coverage was intense: Fox News,  WISN, WTMJ, WTMJ again, and more, both on the day and leading up to it.

Reginald Lisowski (July 11, 1926 – October 22, 2005) was an American professional wrestler, better known by his ring name, The Crusher (sometimes Crusher Lisowski to distinguish him from other Crushers, such as Crusher Blackwell). In his obituary, The Washington Post described him as “a professional wrestler whose blue-collar bona fides made him beloved among working class fans for 40 years”.[1]

My grandfather loved Da Crusher, and would surely have donated some coin to the community fundraiser.

There is something interesting, to me, about erecting a statue to Da Crusher in 2019.  It participates in one phenomenon worth thinking about, especially in light of kayfabe, and it runs counter to another. 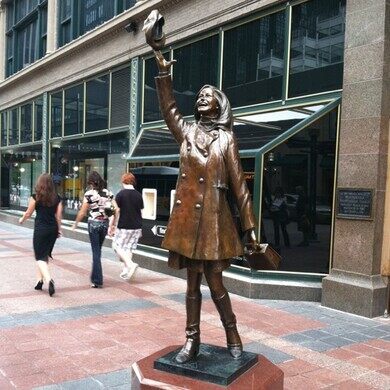 (Image from Atlas Obscura, by lindyi)

This is the third statue celebrating a fictional character to pop into my news feed, after Mary Tyler Moore and the Fonz.  But this presumes that we see Da Crusher as a fictional character.  The statue of Da Crusher blurs the line between fiction and reality in much the way old-school wrestling, pre-WWE wrestling, especially, blurred a line between fiction and reality.

But Da Crusher is being celebrated as a character and as the local son.  I’m still puzzling through how to parse this relationship — if asked, who, or what, is South Milwaukee celebrating when they celebrate the Crusher:  their local son, or the character he portrayed?

Communities and New Histories Being Built

At the moment South Milwaukee was building this statue to Da Crusher, statues are coming down across the United States, because the cultural values embedded in those statues have fallen from dominance.  What cultural values are being manifest in this celebration in bronze?

This site uses Akismet to reduce spam. Learn how your comment data is processed.

After badgering Larry Sharpe for an interview at a 1991 wrestling fan convention outside of New York City, the “Pretty Boy” allowed me to follow him to his hotel room.  As we got to the hotel room door, Sharpe, who had recently wrestled his retirement match, muttered, “If you want this damn interview, it’ll have … Read more Before Shoot Interviews: “Pretty Boy” Larry Sharpe

It’s Time! It’s WrestlePosium Time! The President of the PWSA invites submissions for the association’s WrestlePosium IV. This virtual symposium will happen online on Saturday, April 8th, 2023. We are having the symposium after the WrestleMania festivities so that people who are interested can more easily attend all the events. For more on the WrestlePosium series, … Read more Call for WrestlePosium IV Presentations, Papers, Panels

Scroll back to top